This is a LONG article, but it has PLENTY of pictures that can help you identify exactly what you have!  Please read the entire page if you do not know what you have!

You can also press Ctrl and F and type into the search bar that pops up what you are looking for! i.e. VVT.

We will start off with our vin engine code guide. Keep in mind that the injector type and MAP sensor type are if the engine is stock and has not been modified. It is best to look through the pictures and ensure that you have what is listed. With the ability to swap parts from one engine to another it is important to ensure that did not happen before you took possession of the engine. You will want to look for the 8th number or character in your vin number. For example, an LS1 engine will have a vin code of G in the 8th position of the 17 digit vin from the left. 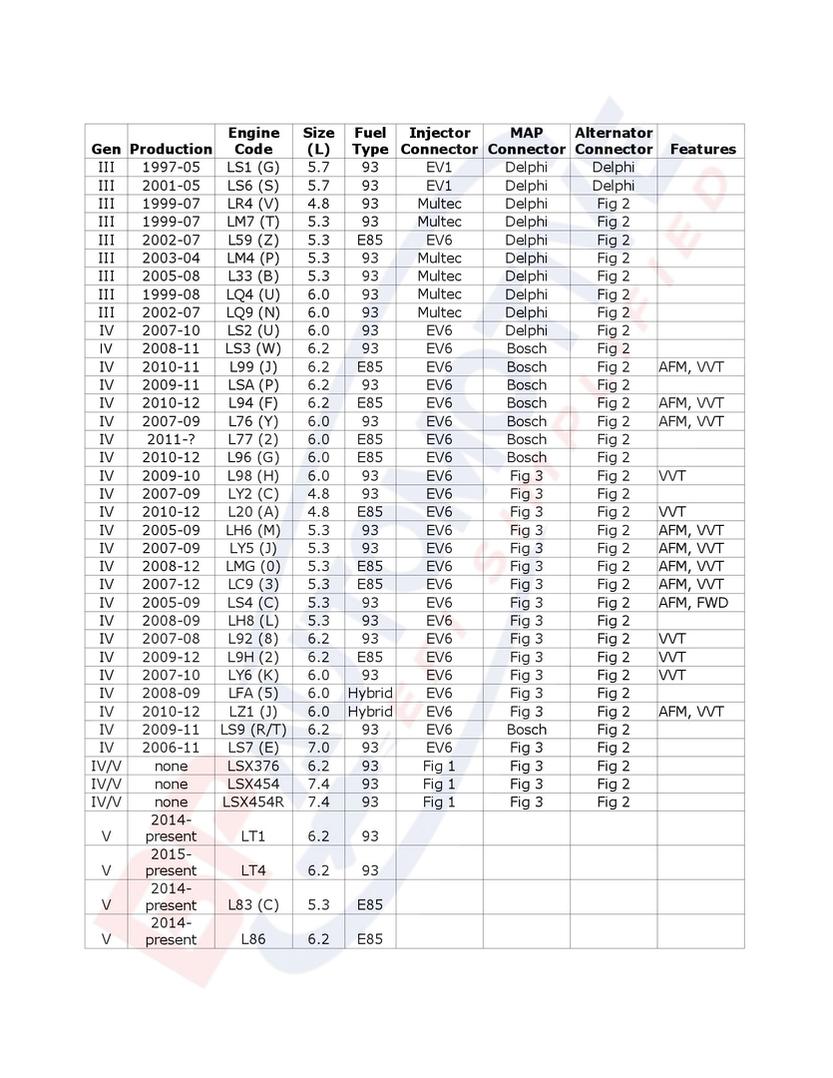 HINT:  Click on the Picture For a Rotatable 360 Degree View!

Now we can move on to more identification methods to ensure that your vin code is correct for what you have.  We also want to identify what throttle type your engine has and if it is different from what you want to use the parts you will need to make that happen.  One definite indicator that you have a Gen III engine is the location of the cam position sensor.  On 99.9 percent of Gen III 24x reluctor engines the cam position is located at the top rear of the engine block right where the distributor is located on an older SBC engine. The Oil Pressure sender is located right next to the cam position, however on Gen III standalone systems it is not used unless you are using gauges that parse the data from the data stream. For example, the Dakota Digital BIM-01-02 Module. In this instance you will have to use a 3 wire oil pressure sender. 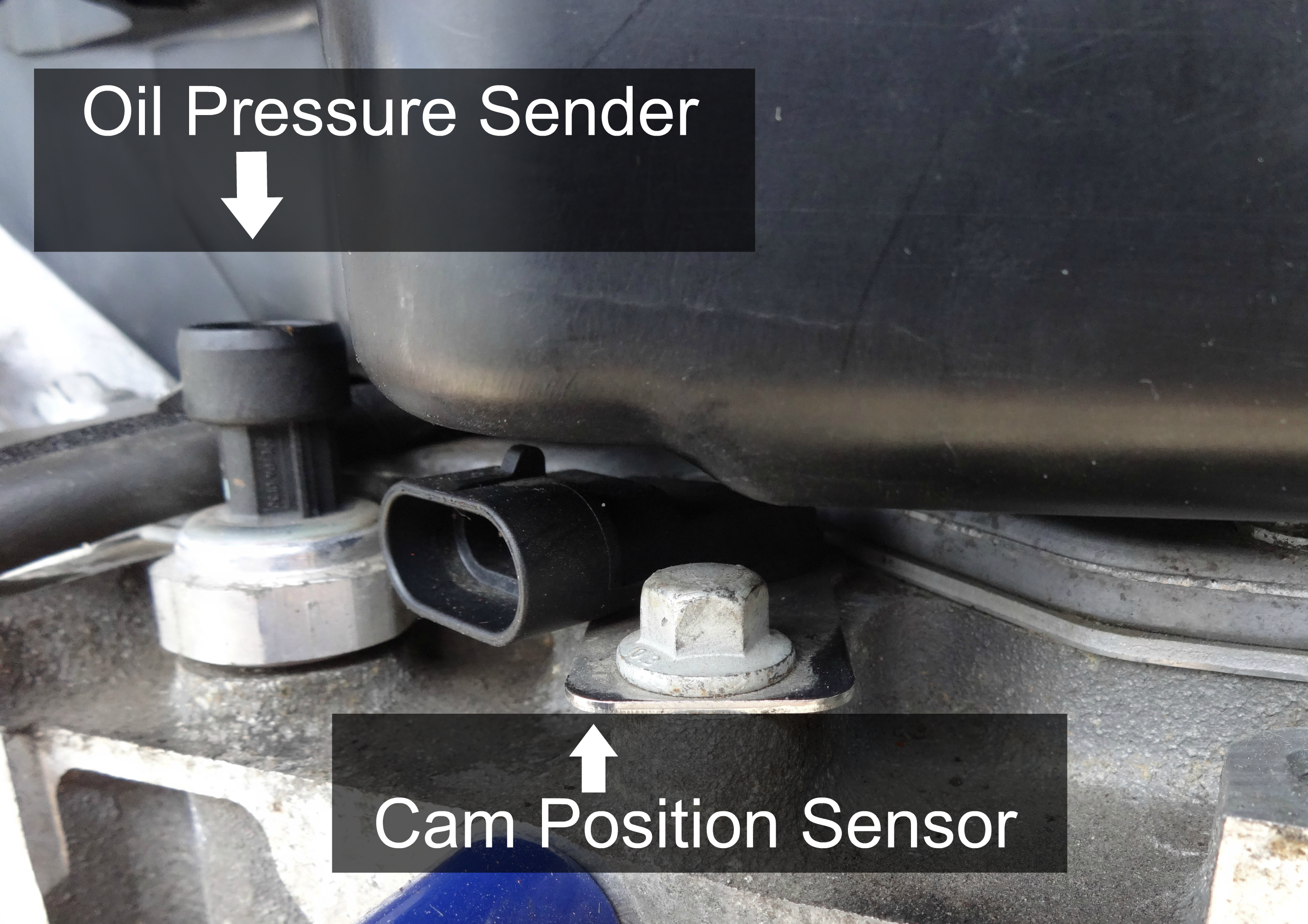 There are a very small percentage of 2005-2006 engines that are 24x reluctor, but they have Gen IV knock sensors and the cam position is bolted to the timing cover. If your engine falls into this category, you will want to look at the crank position sensor color.  This is best way to determine the reluctor teeth count. A 24x Gen III engine is equipped with a BLACK sensor. A 58x Gen IV engine has a GRAY sensor.  The twovpictures below details the crank position sensor location behind the starter. It may be easier to remove the starter to inspect the sensor. Remove the two starter bolts with a 15mm socket. 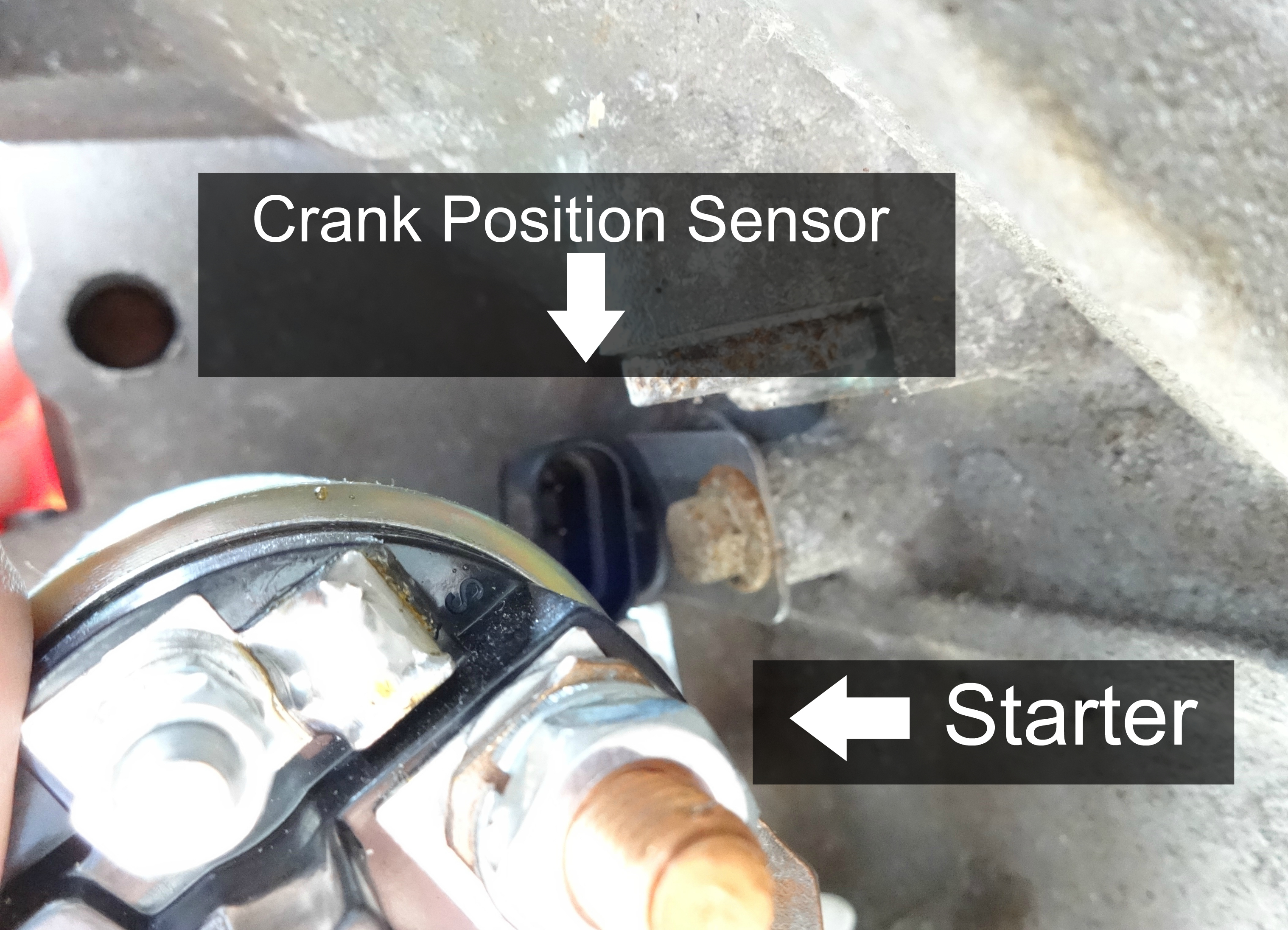 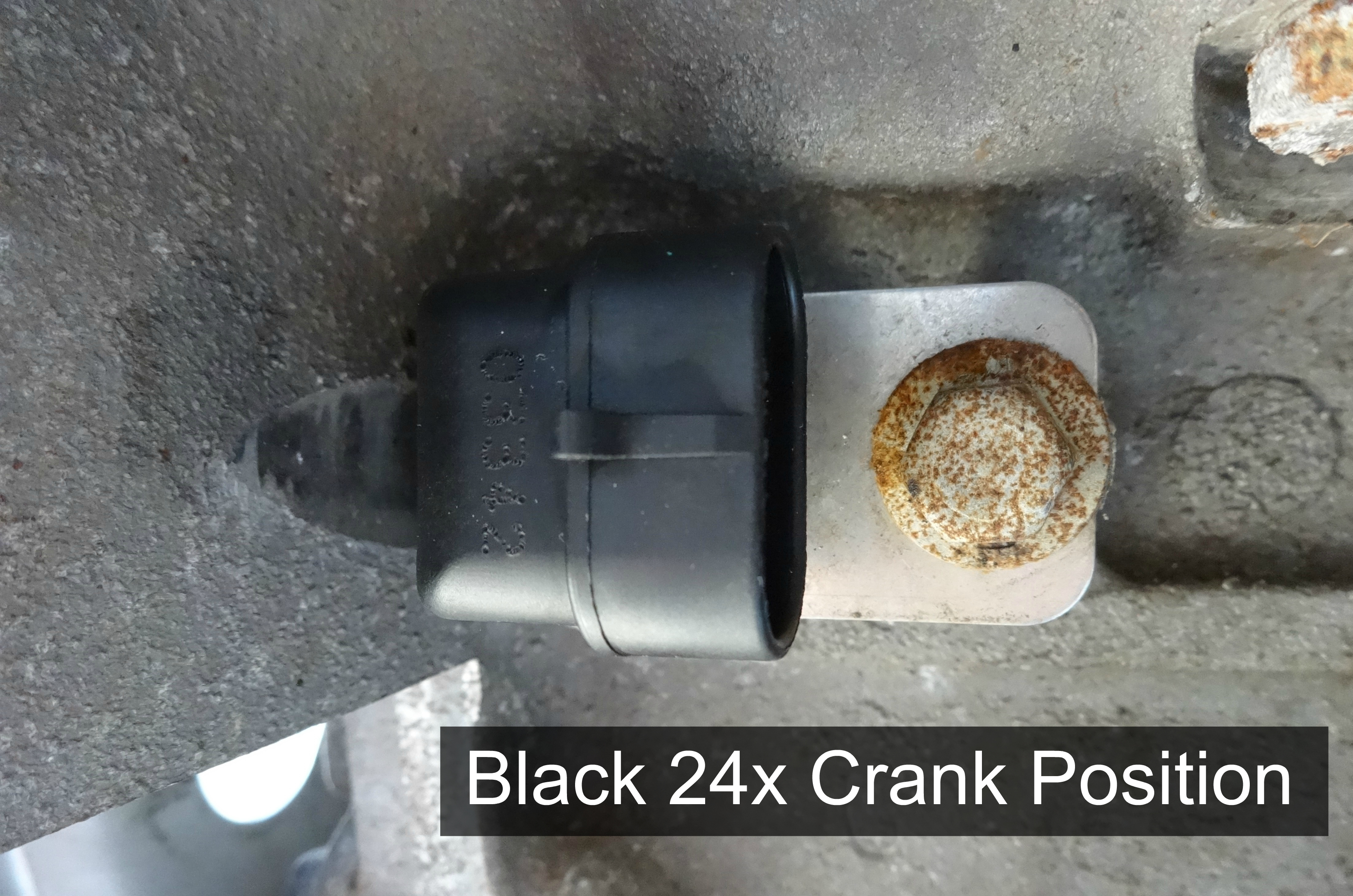 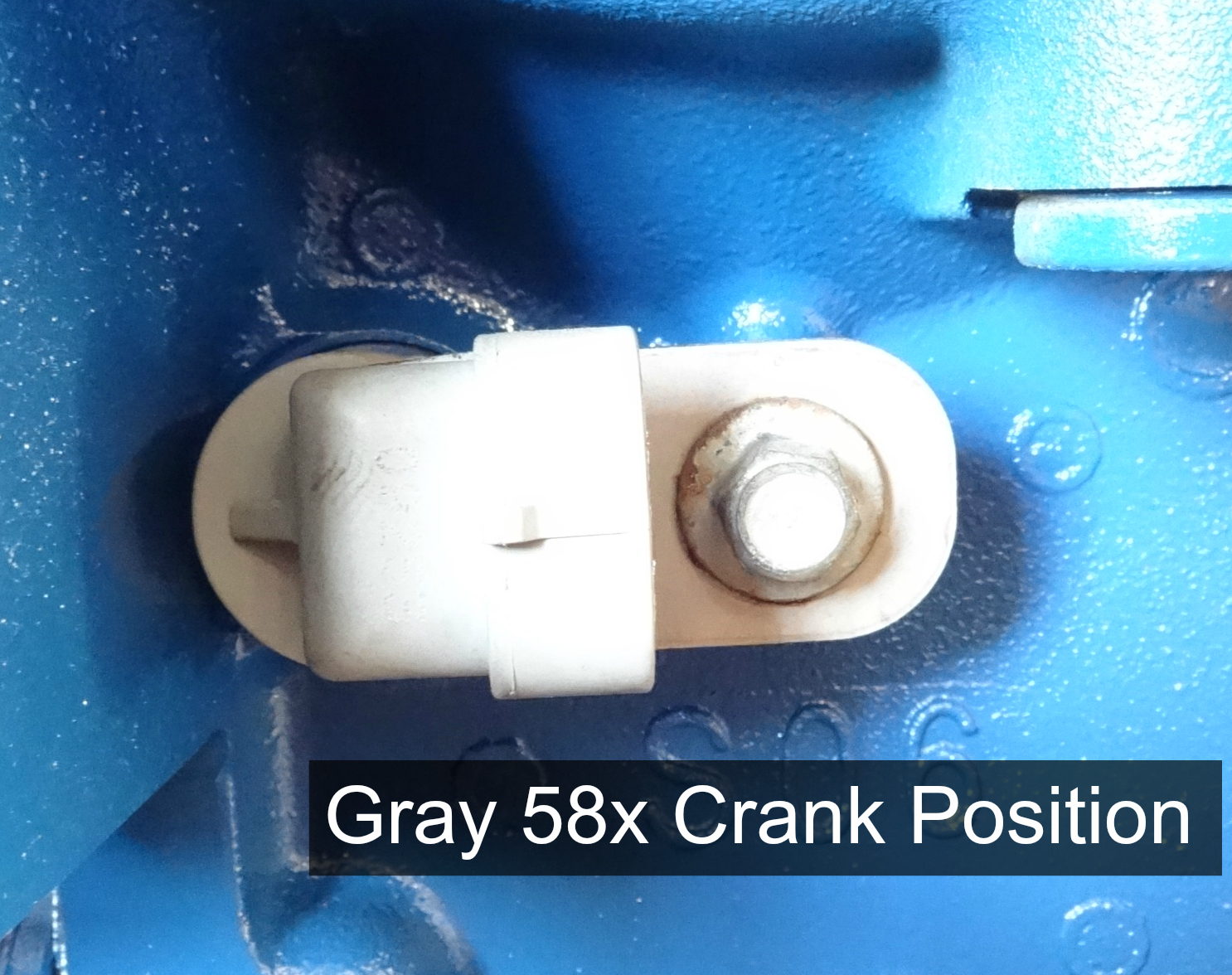 If you still have the factory harness the guide below will also help you by showing the Crankshaft Position Connectors on the harness relevant to the generation of LS engine.  All of these should give you a good idea of what you have, or if you have mixed matched parts.  This is not very common, but it does happen and can make you swap a nightmare. 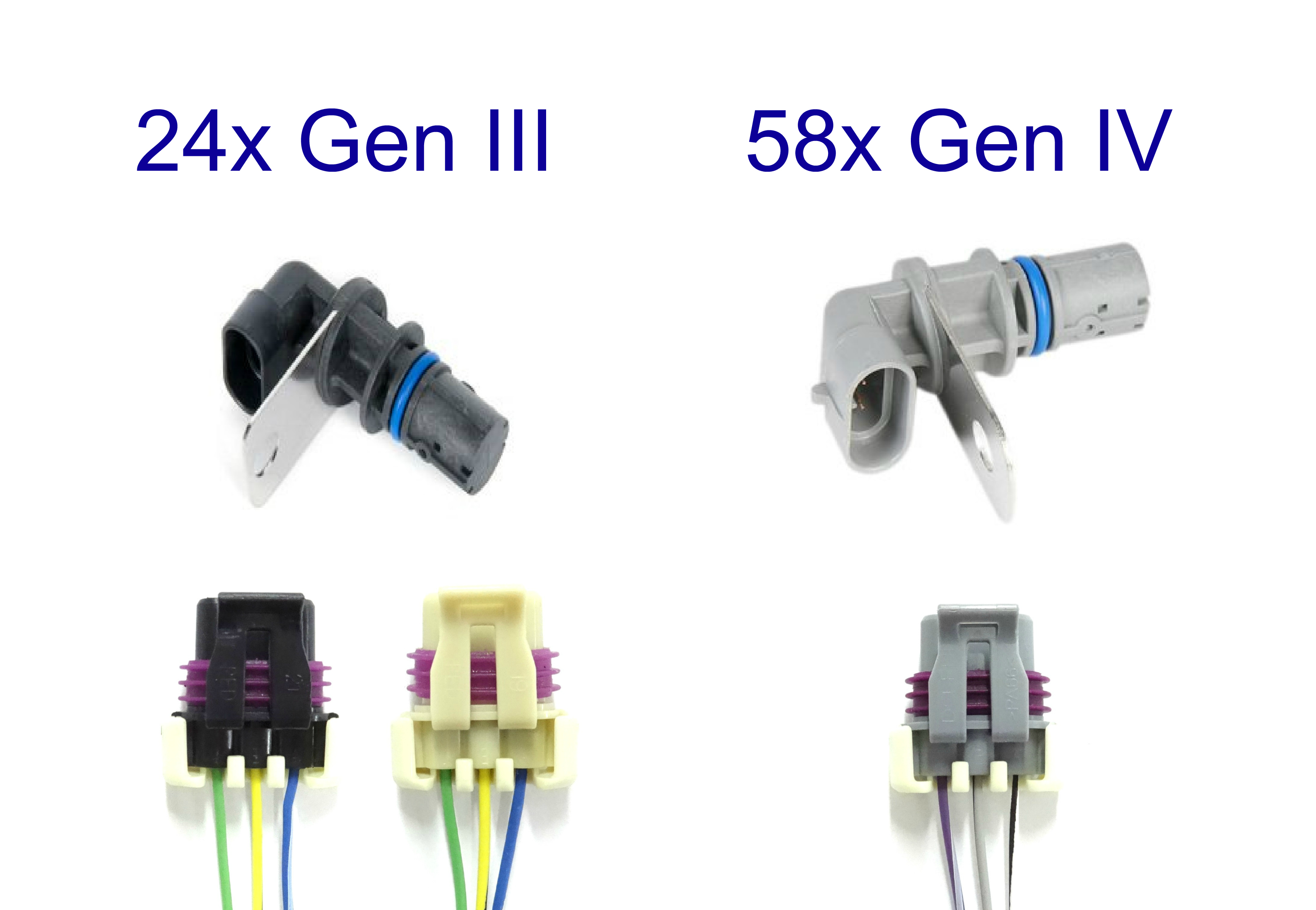 With the crankshaft position sensor covered, we will move on to the small percentage of 24x reluctor engines that have a front cam position sensor located in the timing cover. These engines will also have two wire flat response knock sensors bolted to the side of the block. An E40 ECM is used in factory applications for these engines. They are a Gen III engine that is controlled by Gen IV electronics programmed for a 24x engine.  May enthusiasts opt to run these engines with the Gen III PCM, usually a 12200411. This is required if you are wanting to run Drive by Cable as Gen IV ECMs DO NOT support Drive by Cable.  In the images below the four different timing covers are covered, the first image contains the two timing covers on 24x engines. The timing cover with the cam position is the same, the only difference is the small sub harness that is on the Gen IV timing cover. 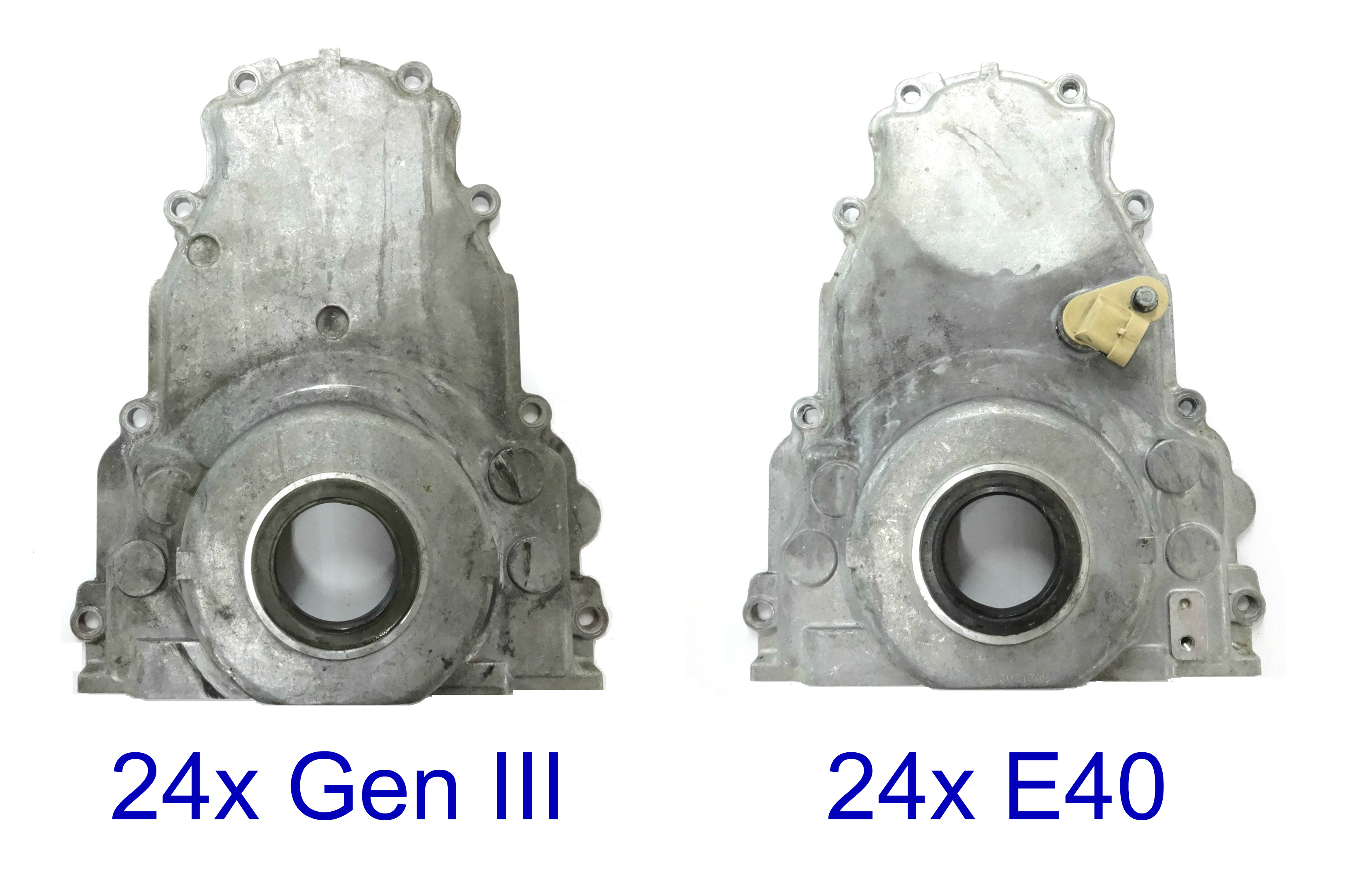 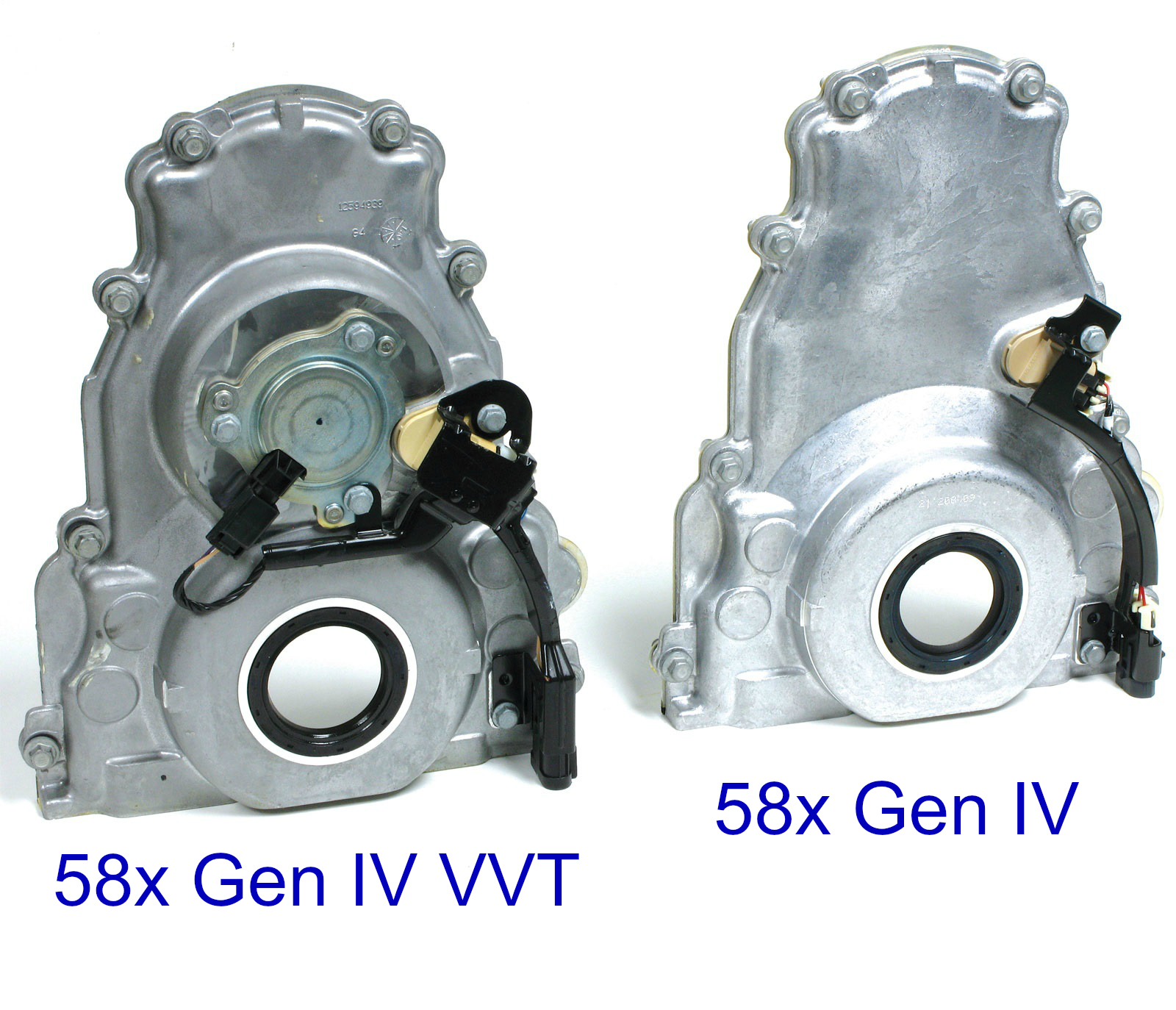 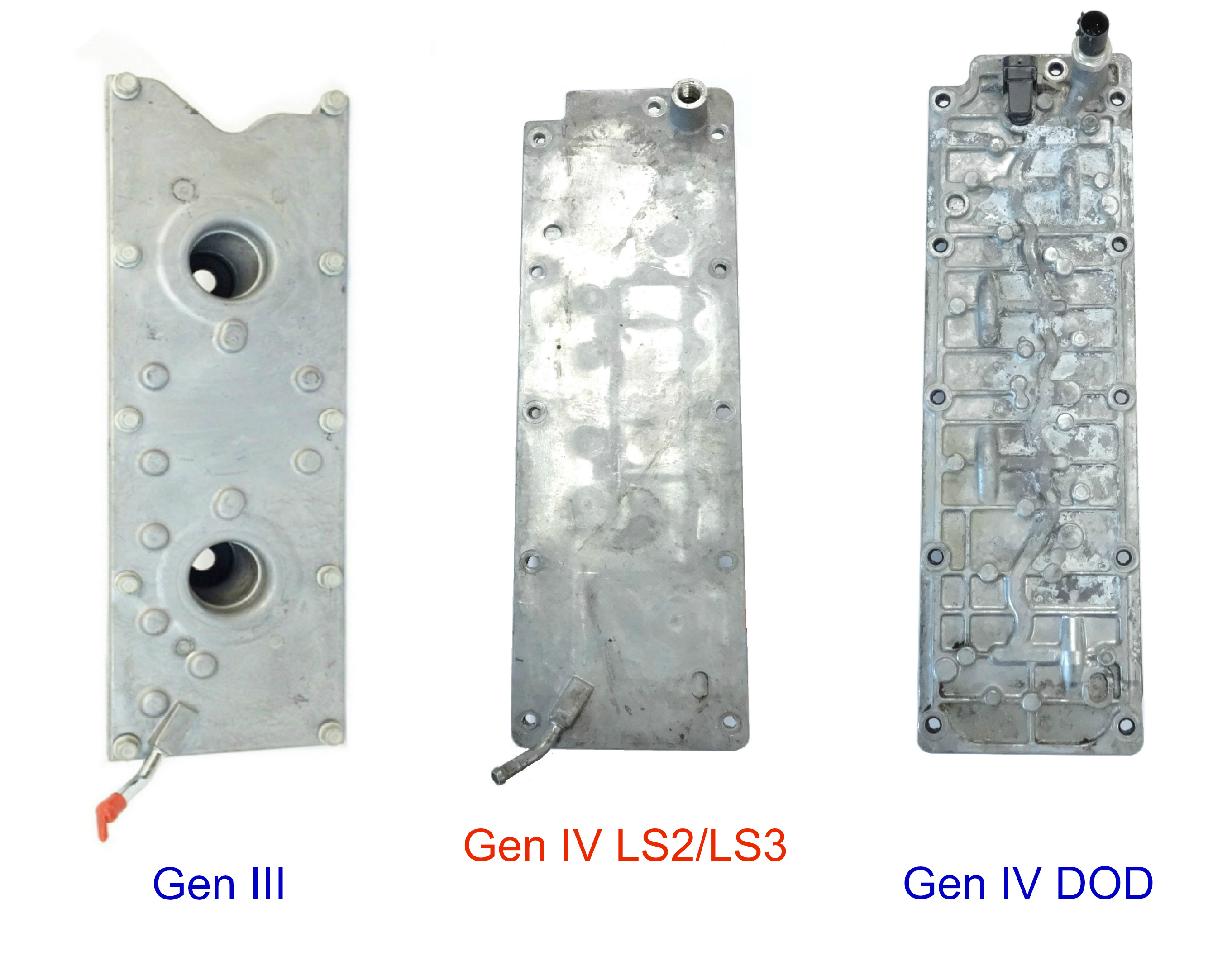 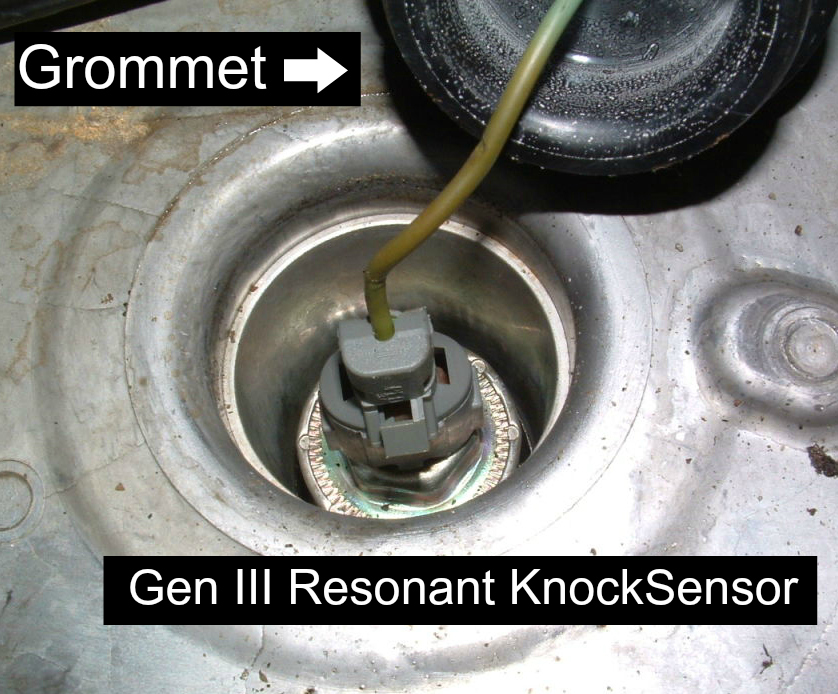 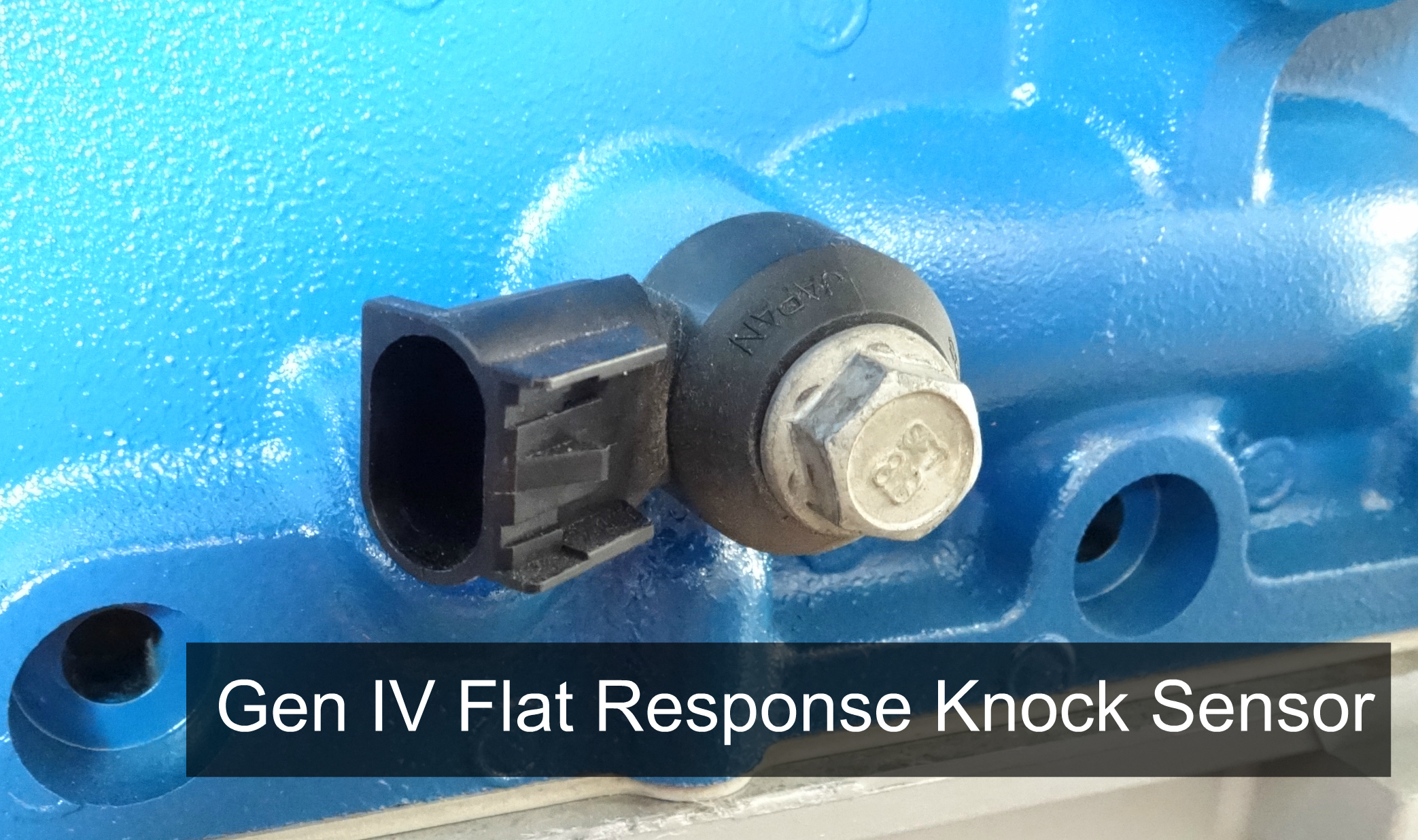